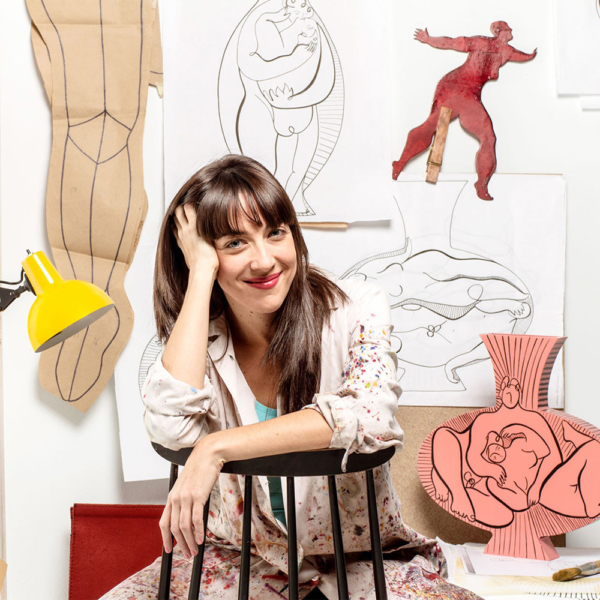 Andrea Santamarina studied at Complutense University of Madrid and the Academy of Fine Arts in Bologna (Italy). During 2004-2006 she joined the Design Department at FABRICA, the Benetton Communication Research Center, working closely with Aldo Cibic. She traded the smell of turpentine and brushes for the mouse and the cursor in Illustrator and succumbed to the world of design. Following a master in Scenography by Central St. Martins, she began to work for companies like Empty in Madrid, coordinating the design of large scale installations and the interior design for museums and exhibitions. Andrea also developed content related to architecture and design for Radio Television Hong Kong and The Hong Kong Design Center.

Attracted by conceptual and narrative design, she worked for designers like Martino Gamper or Jaime Hayon in London. She completed her training participating in several international workshops led by renowned architects, artists, art directors, industrial designers such as Lucy Orta, Andrea D’Odorico, El Último Grito, Golan Levin, Carlos Ferrater. She has received scholarships from the Spanish Ministry of Culture, the BilbaoArte Foundation and the Fundació Pilar i Joan Miró. She presented her first solo exhibition at La Llotgeta exhibition space sponsored by La CAM in Valencia (Spain, 2007). Since then she has been exhibited in Milan, Brisbane, Istanbul, Paris, London, San Sebastian, Palma de Mallorca, Bilbao and Madrid, in centers like The George Pompidou Center, BilbaoArte Foundation, MATADERO (Design Center) or EsBaluard Contemporary Art Museum. She has recently showed her work at Rossana Orlandi’s Gallery during Milan Design Week 2018. She have been teaching and giving lectures in an international framework for institutions like IED (Istituto Europeo di Design, Madrid) or Dmad (Rey Juan Carlos University).